If you’ve been following my blog for a while (or following me elsewhere on social media), you’ll know I love to draw spaceships. I always have enjoyed drawing everything to do with space, ever since I was a little kid, but in the last couple of years I’ve begun to build a little fleet of ships to inhabit my Asteroid Belt Blues universe.

I’ve managed to fill a few sketchbook pages with ships in the last few days, and I dare say there will be a lot more to come in the next days, weeks, and months.

Pretty much all of them are drawn with Copic Sp Multiliners in a Moleskine sketchbook. Colour, as always, is added with Copic Ciao Markers.

If you like them you can buy them as postcards or posters over at my store. 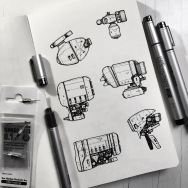 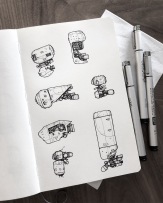 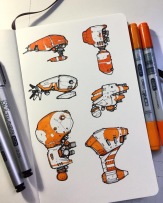 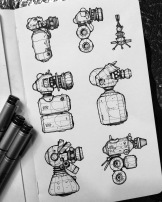 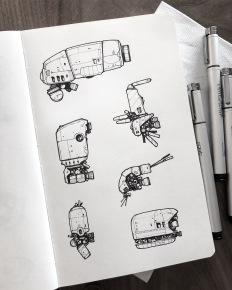 You can find prints of my work here

I’ve just decided that my stack of identically black, and identically plain Moleskines needed a little organising. Only a little. I wrote vague contents description on the covers and spines, so that’ll help a bit when I’m trying to remember where I drew something. 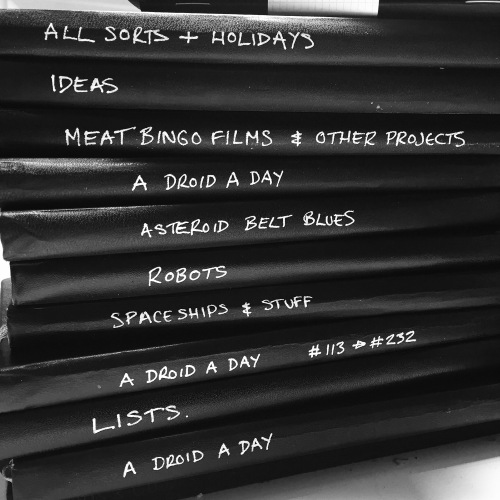 The music is Drawn to the Blood, by Sufjan Stevens.

If you follow me on Instagram, or are a regular reader of this blog, you’ll know I have a thing for weird tentacled islands. There’s just something very cool about a seemingly idyllic little place – but underneath the ordinary facade there’s horror!

I did this sketch last night in my Moleskine using Rotring Tikky, Copic Multiliners and Kuretake No 8 brush pen, and there’s definitely a bit of influence from Notes from the Shadowed City – it’s a bit blacker and more angular than my typical stuff. As always, something like this is a lot of fun to draw. 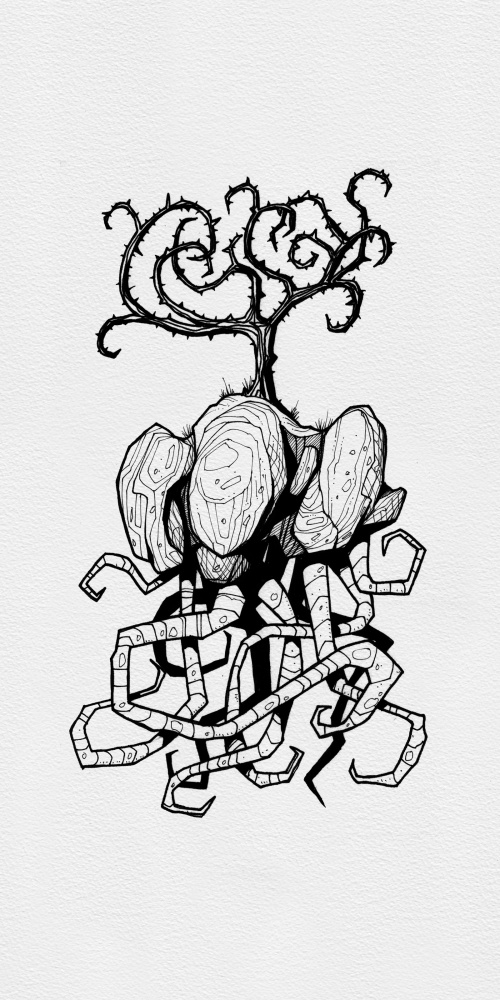 I’ve drawn a fair few cityscapes and imaginary places over the last few months, some of them purely personal, some have been commissions, some have been posted here before, some haven’t, so here they are collected in one place.

The first, City on the Edge of Nowhere, is one of my favourites. 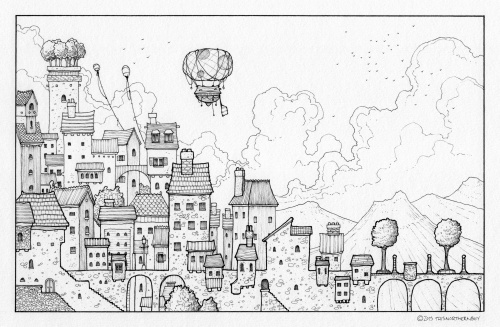 City on the edge of nowhere.

The City and the Tree

The City and the Tree II

The Light on the Rock

Two Sides of the Street

Nobody Gets off this Rock

As I’ve written before, I do love drawing spaceships. Here’s a whole double page spread from my Moleskine, full of little orange spaceships. 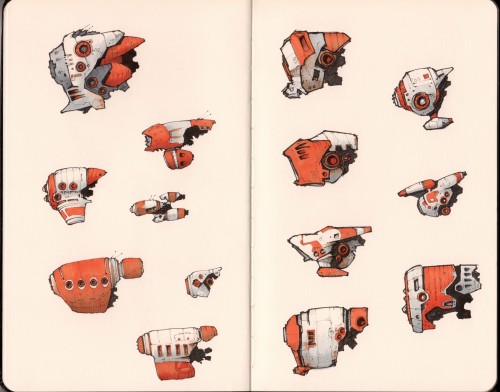 The Mechs of Mars

Sometimes, when I post my droid pictures on my Tumblr blog, I write a little accompanying text. Sometimes this is just a quick one line description of the droid, or how I’ve drawn it, but sometimes I write a description that hints at a future history of these droids. 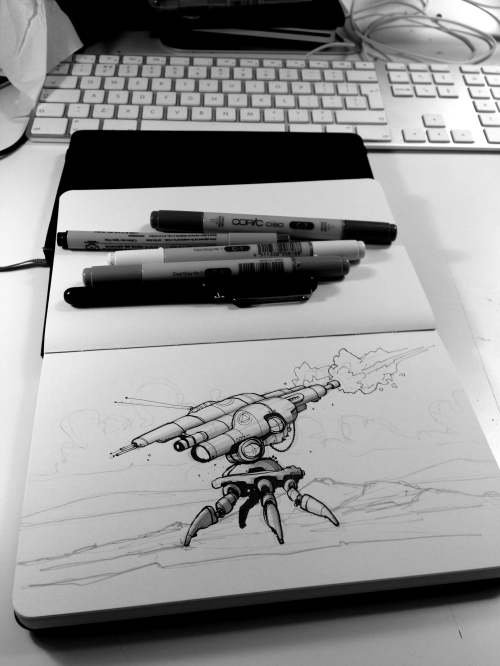 Air Defence Drone.
Designed and built in ‘74 by Kinetic Energy Systems Inc., the A.D.D. first saw use in the defence of the Olbers way station on Ceres. Shipping with both an Atlas-class Railgun and a Sigma-rated Plasma Cannon, the A.D.D. is a very capable weapon. With an onboard A.I. of .08 Human Analog, the drones can be deployed and then forgotten on the battlefield as they calculate the best way to achieve their orders. Currently the onboard A.I.s have recorded only one psychotic failure [see History of Belt-Mars Conflict: Vol VI: Ch 8.1 Brodsky].

Martian Eddie.
Eddie was built as a general purpose droid in late ‘78 and was shipped to Mars that same year to work for the Terraforming Committee. After 8 years of hard work, Eddie was sold to the owner of an algae farm in the new northern ocean. The algae farmer didn’t see robot rights as important and didn’t treat Eddie with much care or attention. In early ‘90 tax officials visiting the farm found no trace of its original owner, discovering Eddie in charge of operations. The ensuing legal case saw Eddie evicted and from that point on his antipathy to human kind was fixed. During the next decade Eddie could be found at most of the major flare-ups between humans and robots. The last anyone saw of Eddie was during the Tharsis Rebellion of ‘08 where he was seen at the heart of the robot offensive, brandishing his favoured plasma cannon as the Phobos Space Elevator came crashing down.
Rumours of Eddie’s survival have persisted, even though it’s now nearly 30 years seen he was seen. These rumours have been strenuously denied by the Human government of Mars.

I love the vague, hinted at history of far future conflicts hinted at in these descriptions. I don’t think I’ll ever write all the connecting information, better to allow people to fill in the gaps themselves. I do have a rough framework of a timeline in my head, although I’m scared to write it down in case it ties me down to a particular set of events.

I like to draw the droid, and then just see what suggests itself. That way I can be surprised too.