I’ve drawn a fair few cityscapes and imaginary places over the last few months, some of them purely personal, some have been commissions, some have been posted here before, some haven’t, so here they are collected in one place.

The first, City on the Edge of Nowhere, is one of my favourites.

City on the edge of nowhere.

The City and the Tree

The City and the Tree II

The Light on the Rock

Two Sides of the Street

Nobody Gets off this Rock

Continuing my doodles of odd little medieval/Tudor/olde/fantasy streets and buildings.

Drawn in pencil, inked with a Copic Multiliner and Staedtler Pigment Liners, coloured with Copic Markers. All in a Moleskine sketchbook. I do love Moleskins but I wish the paper was a little whiter. 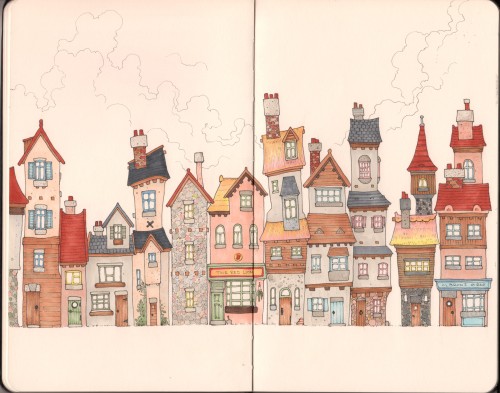 An illustration based on the Guinigi Tower in Lucca, Italy.

Drawn with a 0.03 Copic Multiliner and a 0.3 Staedtler Pigment Liner in an A5 Moleskine sketchbook.

There is something magical about creating a place or a world that previously only existed inside your own head. It’s impossible to draw (at least it is for me) an imaginary landscape without wondering about the people who inhabit it, or the history of it, or the flora and fauna that fill it.

Some of my landscapes are very much rooted in the real world, the lake district is never far from the tip of my pen, while some have only the loosest foundations here on earth.

Only one of my landscapes exists as is, Slater’s Bridge in Little Langdale in the Lake District. I really must get back there with a sketchbook. It’s an amazingly beautiful place. 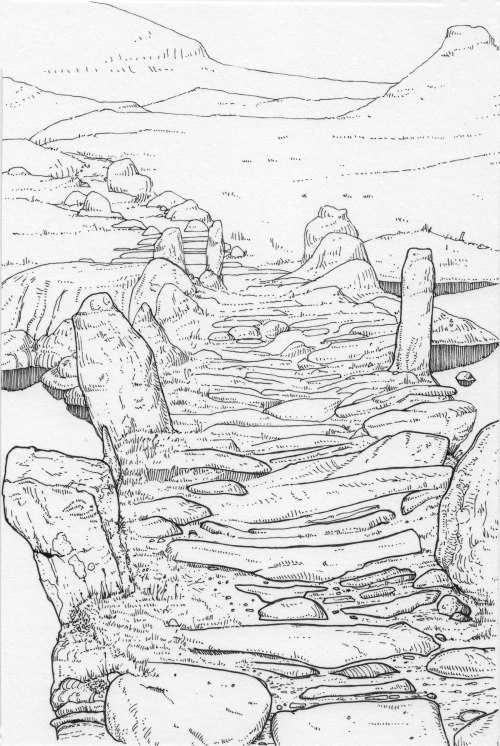 People are very rare in my drawings, partly because I’m pretty terrible at drawing them, but partly because I want to be the person in the picture. I don’t want to share these places with anyone else. Extreme escapism for me would be stepping into one of my illustrations and exploring what’s beyond the edge of the page.

Land of the crow

A few days ago I was idly doodling, probably while I was supposed to be doing something else, and I ended up with the beginnings of a medieval town. I worked on it for a couple more hours, and was pretty pleased. It’s wonky as hell, but it’s interesting I think. 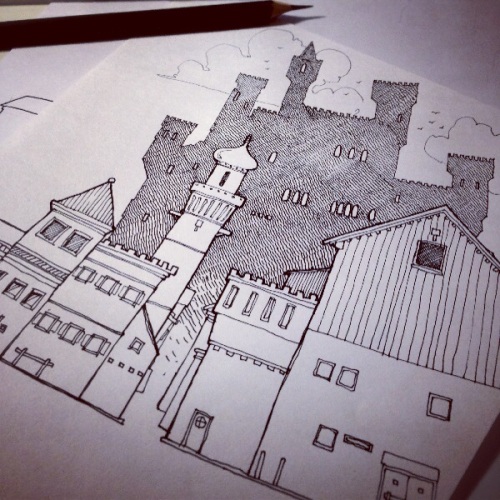 So I liked this, but it really was a bit slap-dash. So I decided to have another go at it, taking a bit more care and time. Over the next few days the drawing progressed…

I think it manages to keep the same feel as the first sketch, but it’s better balanced and more considered. I think maybe an extra layer of buildings could have worked, maybe next time.

The last thing I did was to have a go at colouring it. I’ve never used photoshop to colour one of my sketches before, so this was a bit hit and miss. I’m sure I went about it in an entirely inefficient way, but the result was OK. I like the colour palette, I’d like to get more texture into the next one though.

The final (for now) coloured illustration

So that’s The City & The Castle complete.